Smart Luggage - was developed by NUA Robotics, Terry Pratchett would be happy.

Do you wish to have your own tail? If you say yes, look for it in company "in-tail". Because everyone loving it, it's coming in two variants, big for adults and for half to kids. Fur is changeable. See the vid.


The last one is not funny but helpful, do you like ancient maps (In this case from Czech Republic)? Yes? Then perhaps you can help with determining their placement, as in ancient ages there exactly wasn't the same coordinates system. If you would like to help the project look here. But there's one hitch here, you need to translate it a bit from czech at least a little, these are only czech old maps on czech pages. The tool itself it's in english. BTW the Czech Republic is in middle of Europe, right under the Poland, next to Germany.
"We made it!"
The Archives | Collection of H3&WoG files | Older albeit still useful | CH Downloads
PC Specs: A10-7850K, FM2A88X+K, 16GB-1600, SSD-MLC-G3, 1TB-HDD-G3, MAYA44, SP10 500W Be Quiet
Top

Hehe cool, except Gaston got there first. 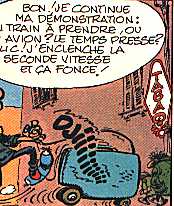 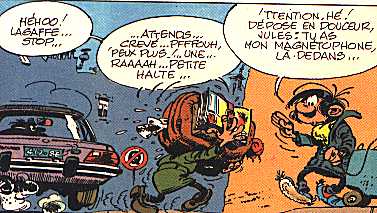 In War: Resolution, In Defeat: Defiance, In Victory: Magnanimity, In Peace: Goodwill.
Top

Hehe, I still have this same Pif issue at home, along with dozen of others. Have no idea about the text (French is not my strong suit), but I love the pictures.
Top

The strip is about how Jules carries a huge bag full of stuff, including some of Gaston's stuff. Gaston has an electric suitcase that he's invented, and of course he has a much easier time transporting the goods. The joke is revealed in the end: the suitcase is almost all batteries. The only things he can carry inside is a toothbrush and toiletries.

Back on topic, if they actually got a self-propelling suitcase to work properly (i.e. is transportable through airport security, doesn't catch fire in the luggage compartment, can endure the hard treatment by baggage handlers throwing it around etc.), this could be a big new step in travel.

In War: Resolution, In Defeat: Defiance, In Victory: Magnanimity, In Peace: Goodwill.
Top

Also if they don't use these suitcases to make bombs going to a fro easily in the middle of a crowd.

Don't say that too loudly or they'll ban them...!

Nah, there's no real difference from today, where guys can carry suitcases.
In War: Resolution, In Defeat: Defiance, In Victory: Magnanimity, In Peace: Goodwill.
Top

Yeah, I was just wondering that, for every good thing people develop, there is also the potential misuse of it. It's always like that. I was reminded of the drones. Not long ago, a student managed to make a drone fire a revolver. Then I was left to ponder: why? Why didn't that same god damn student make his drone plant trees?
"There’s nothing to fear but fear itself and maybe some mild to moderate jellification of bones." Cave Johnson, Portal 2.

Now something less happy but not sad.

Agnitum Outpost will end, support will cease with end of this year. So, if you used this product and been happy, then you need to saddle another horse.

A company itself was acquired by Yandex and it will be responsible for Yandex Browser security in the future.

Photo of potatoe was sold for over 1 000 000$. There is always glimpse (of hope), especially when you are renowned photograph admired for not even once selling minuscule negative under mere 200 000$. Prestige pays back. Still, Apple would be sold for more...

Guess who?
Interested how does look this specie, peek to this link here.

In many games, when you look at orc, they have, in comparsion to body, very smallish helmet. That's because, they wear it on a very small head. Being that in a (video)game industry, it's not dramatic.

But that oddity exists even in our world, it's called Microcephaly and it's very devastating illness. Now there are news that this is connected with virus ZIKA, which is being transmitted by mosquito (Aedes aegypti), who are spread almost on the whole southern hemisphere. These are but not only.

Another rumour, is pointing to brazilian vaccine against pertussis. An interesting scraps of informations were collected here.

It wouldn't be the first time, this vaccine is mandatory prescription for pregnant women. To mind comes another infamous cure to alleviate sickness of all sorts, painkiller Contergan, which indeed worked, but with leaving nasty effect on newborns, as they were born with underdeveloped limbs or different body parts.
"We made it!"
The Archives | Collection of H3&WoG files | Older albeit still useful | CH Downloads
PC Specs: A10-7850K, FM2A88X+K, 16GB-1600, SSD-MLC-G3, 1TB-HDD-G3, MAYA44, SP10 500W Be Quiet
Top

A bit of pondering about Ashes of Singularity game by Brad Wardell. Slightly about game developing, recommended reading.