This thread is to discuss some strategies to beat down the new boss monsters sent in for Kingdom Battles.

They happen every, what, 3 days? One boss monster is chosen to attack your kingdom. That monster replaces the regular on-land merchant, and you have 48h to get rid of it. If you happen to kill it, the merchant will appear, but it seems (need confirmation), that one day would be reserved to the monster, and another day to the merchant, which could explain the fact that killing the monster on day 1 would make the day-2 merchant appear, and when the second day started, there would be no merchants, because the merchant had already appeared.

The monster has 3 levels: easy, hard and brutal (each of them, the creature will show its appearance as they usually do for 4, 5 and 6 stars); and you must spend a great amount of energy to engage in each battle: 30, 50, 70 (need confirmation). The differences of difficulty between each level is greatly substantial. All rewards are very good for their level of challenge.

The first one was the Blue Stegosaurus, which happened to absorb and be healed by Yellow attacks.

Now, the second one, is the Red Asura. It is not immune or heal with Blue attacks. However, it has some nasty debuffs, as high as 95-98% of effect upon weakening defenses or diminishing drastically your healing output. I'm having a very difficult time with the Hard level, still mulling over a way to take that fiend down. Of course, it's about dispelling these awful ailments asap, so I'm thinking on my next team to attack it, because costing 70 energy every time I try it, it's not very productive losing too much.

So, have you guys beat the Asura yet?
Last edited by Panda Tar on Mar 31 2018, 7:18, edited 1 time in total.
"There’s nothing to fear but fear itself and maybe some mild to moderate jellification of bones." Cave Johnson, Portal 2.

As it's only second week after its introduction, so I can't say with 100%, but so far boss appears only during weekends.

Panda Tar wrote:you must spend a great amount of energy to engage in each battle: 30, 70, 100 (need confirmation).

Yeah, those might be accurate.
"There’s nothing to fear but fear itself and maybe some mild to moderate jellification of bones." Cave Johnson, Portal 2.

I beat it with Lich, Celestial Papa, Frost Giant, Siren and Statue. The statue was not that useful, I didn't realize the Asura would dispel until in the battle. Better to have a blue Buffer/Damager instead. Naga would be good I think.
Last edited by wimfrits on Mar 31 2018, 7:52, edited 1 time in total.
Are you suggesting coconuts migrate?
Top

I think I won't be able to beat the Asura on hard, this time. My most evolved blue units are defensive ones, like the Turtle, Siren, Walrus. Well, there's the lv 75 lizard and I just evolved the Stegosaurus to 6 stars, but it's lv7, yet. I have nagas, but I got them very recently. Haven't started evolving them yet. My statue would always be the first to die.

What I figured on this Asura, is that it'll have that fatigue debuff every time it debuffs your team. But, it looks like it debuffs one status per time, like defense, then attack, then power etc. If the team does not rely only on one of these status, then the debuffing wouldn't be so annoying, except the fatigue. Still imagining which team would survive it all. I was thinking on the swan and siren for supportive healing and cleansing. Probably need a razzer, which I have some options, like Hippogriff, Shaman, Hunchbacked. Hippo buffs against debuffs, but it's Green... and then would need damage dealers. Lizard is the one with highest Blue damage I have, and Colossus and Cerberus are the highest damage overall. Ah, yes, and have a lv 75 kangaroo, a panda, walrus, and some stunners, and the owl, dustdevil as the best silencers.
Last edited by Panda Tar on Mar 31 2018, 20:19, edited 1 time in total.
"There’s nothing to fear but fear itself and maybe some mild to moderate jellification of bones." Cave Johnson, Portal 2.

Ok, green units are possibly a bad choice. Which disables the Bard.

You need something to remove the debuffs and possibly also Assura's buff. Or to keep your buffs on all the time

Possibly choices are Arctic Eagle & Lizard or Naga & Lizard. For second case you will however need to secure your luck.

That A thing is also capable of stealing enchantments, so Otter or DE can be handy. But I managed it without. It however cost me a lot of prismatic orbs. Around twenty. 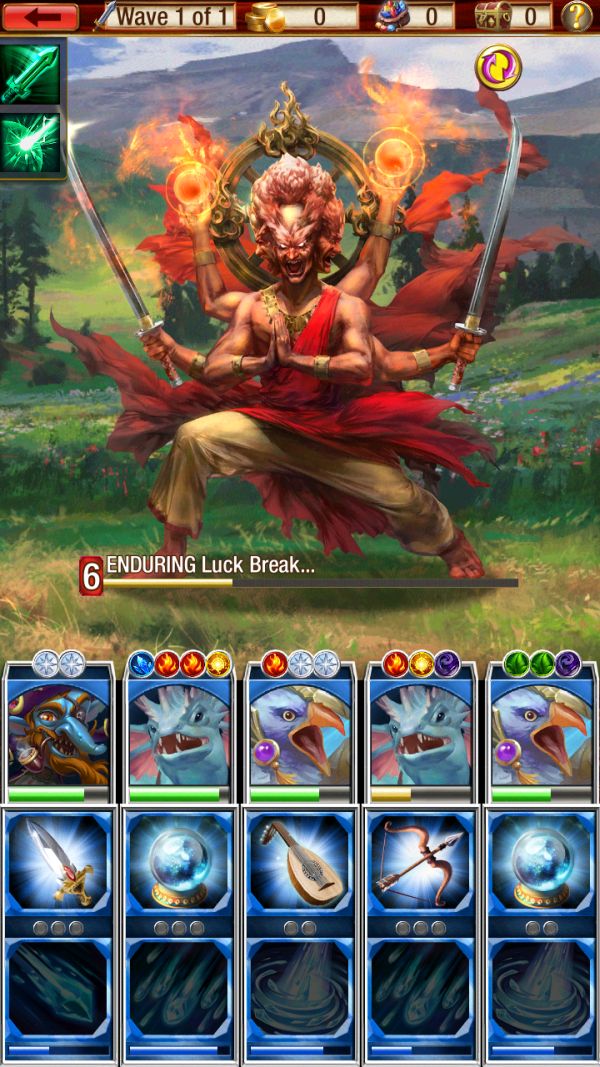 To keep it Brutal.. 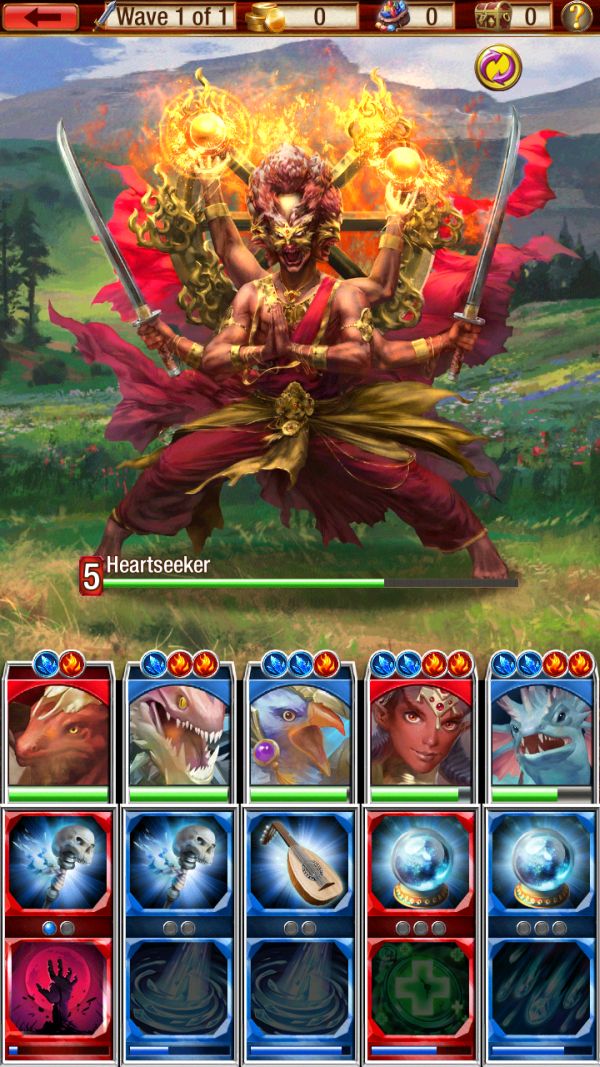 Panda, if Asura didn't cast 100 turns silence you could solo it with Siren. Bring first step awoken Hunch and Siren, you can use Colossus to nuke the Asura, Owl for Silence is good too, a Butterfly for the buffs.
Top

Oh, I didn't try again, in the end. Now, I'm waiting the gold event, because upgrading this and that, castle, shrine, expansion, gold dried out completely. I'm also trying to farm those event creatures, like Light elemental, the beetle, kangaroo to finally finish its awakening power and perhaps the kitsune.

Next Kingdom battle I'll do better.
"There’s nothing to fear but fear itself and maybe some mild to moderate jellification of bones." Cave Johnson, Portal 2.

My advice: bring chaos nymph for steal, keep her mana up, a rezzer for nymph and stun/silence to buy some time.
Watch out for the luck buff + winds of fortune as it will restore all HP.

Never mind Light Elemental it will come back soon enough, the Beetle/Roo quest is only once a year.
Yes it is highly suggested to farm the Tavern map during WE at least until all your Kingdom is uncovered.

The final/Brutal. The druid didn't have as much purpose as I thought. The stolen buffs and nymph's heal are sufficient to keep the team up. Important is to have enough black dots
Are you suggesting coconuts migrate?
Top

I'll see how far I can get on brutal. Hard was much easier this time than the Asura.
"There’s nothing to fear but fear itself and maybe some mild to moderate jellification of bones." Cave Johnson, Portal 2.

Should also come with something but life is hard without Space Papa. I can stun him, poison him, debuff him or burn. Need to choose wisely..

I'm fighting the hard battle right now. What I gather is that it uses the Statue ability, but it seems he's never affected by MEND (confirmed that he does, but he was simply too unlucky most of the battle to have it triggered on him). He dispels our team, he can use those BREAK abilities. And whenever you use a Special Ability on him, he'll cause a 100 turn Fatigue on you. His Break abilities also are very strong. He also has the Scourge Stun, which damages and stun the whole team, but has not a high percentage of success.

The team I'm using right now is made by Chaos Nymph, Clairvoyant Swan, Statue, Shaman and Colossus. Swan is basically to cleanse the party after they use Special abilities on Anubis and bonus mana. Chaos Nymph to steal the Statue ability he casts, Statue to be Statue, Colossus to damage, Shaman to resurrect the fallen.

I have no idea how Brute level will be, but it seems it might be less troublesome than Asura.

I forgot to mention that it reflects back damage when you hit him with normal attacks. I don't know the %, but it might be around 10%.

He keeps with that pattern until you get him to red health. He then casts Silence Break (100 turns), which affected all but my statue (bless it). After that, he casts Soul Eater or something, that inflicted, and I think it's a fixed damage, 10K on all (part of the damage heals him). Only Colossus and Statue were left alive. Colossus eventually died because of fatigue, not being able to heal. However, even with Anubis healed almost back to half his health, I managed to solo him with Statue.

Not sure, but perhaps the 100 turn silence and Soul Eater are cast only once per encounter.
Last edited by Panda Tar on Apr 14 2018, 7:44, edited 2 times in total.
"There’s nothing to fear but fear itself and maybe some mild to moderate jellification of bones." Cave Johnson, Portal 2.

Nice. I also saw silence and soul eater occuring once.
Anubis seems an Anubis/Fallen Angel combination, with the nice added touch of doing 10k damage to all near the end.

Just beat the final one with Lich, Watcher, Statue, Druid, Chaos Nymph. This was NOT a good team though

No breathing space because of lack of stun and silence. Because Anubis turned out to spend most turns casting buffs, Chaos Nymph was stressed and Statue did not add much.

After the final silence, my team wittled away. Watcher died second to last and revived all except the still standing Druid

As the still silenced Druid was my only cleanser and she refused to die, I never got to cleanse any debuff after that.

My advice would be to bring Chaos Nymph, stun or silence or second dispeller, massive cleanse (preferably cleanse ALL debuffs), Green units and sufficient HP for the one time 10k damage. A rezzer with a one time self-rez like Hunchback to cheat the silence is nice as well.

If I could try again I think I would like to try with
Chaos Nymph, Ettin (to alternate with Chaos Nymph), Watcher, Druid, Forest Giant or Medusa. But then I'd have to invest in Ettin and FG/Medusa first

Are you suggesting coconuts migrate?
Top

I think a good question would be, how much damage he's having left when trying that 10k final blow.

Yes, good point. Not sure if the 10k was before or after the final silence, but it was close to it.

Stun and silence would surely work. Also helps to relieve the Nymph
Are you suggesting coconuts migrate?
Top

Giving up, had just 5 re-rolls and couldn't re-roll whole team.

Draconic Knight, Bard, Sleazy Hulk and Hippogrif are pretty useful, they did it to the end of yellow but no further.
As I couldn't complete them I also cannot re-roll Treant -- Treant needs to be 3d or 4d will all dots green, to prevent resists -- so, there it goes..

I also can imagine easy use of Chaos Nymphs, even two..

Anubis heals in each round 5k damage, buff and debuff, and it's having timing 3/4. So you need to adapt to his rhythm. And occasionally he deal a quite big blow. He also deals these 10% if you attack with your primary.

(In other words he hit twice in one your round.)

Note, this big blow appears to be just DoT, so it happens randomly. Probably with the exception of the last one.

That's a good question. I'll make a list of units based on which Attribute their Special is based, then Healing, Cleanser, Dispeller etc. It might help a bit. Then we update it as we add other creatures to the list. As I have not as many as you.
"There’s nothing to fear but fear itself and maybe some mild to moderate jellification of bones." Cave Johnson, Portal 2.