And yes, that's another dangerous unit.

Sadly only x8 multiplier but it has its perks (in case the missing color dies multiplier still applies, also extra mana ball for healer).
All my (main) party can trigger x8.

So with "Mystic Dark Elf" we had previously also "Centaur Chieftain" 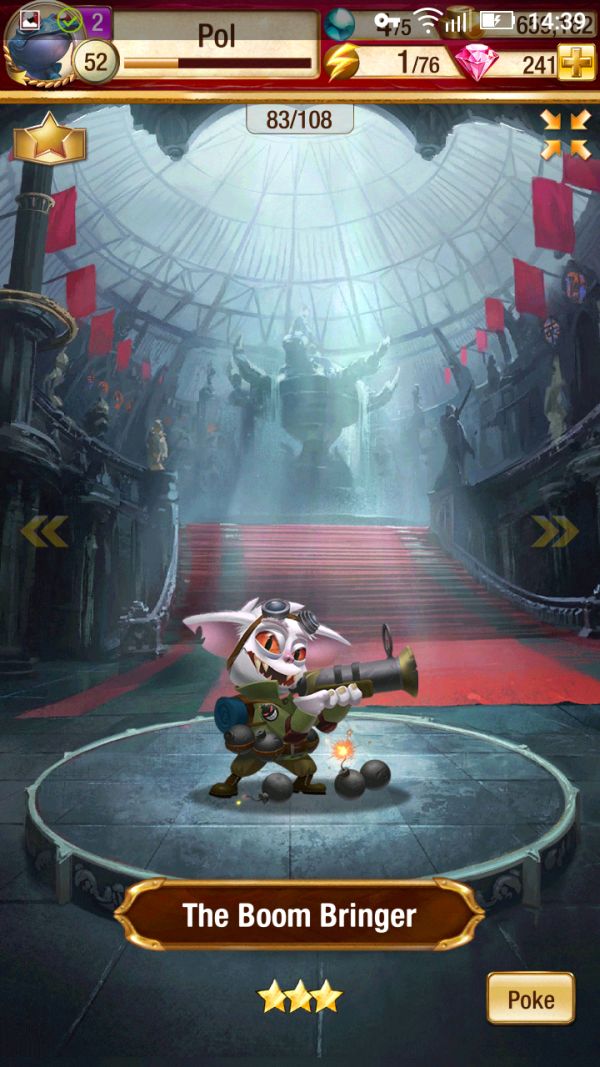 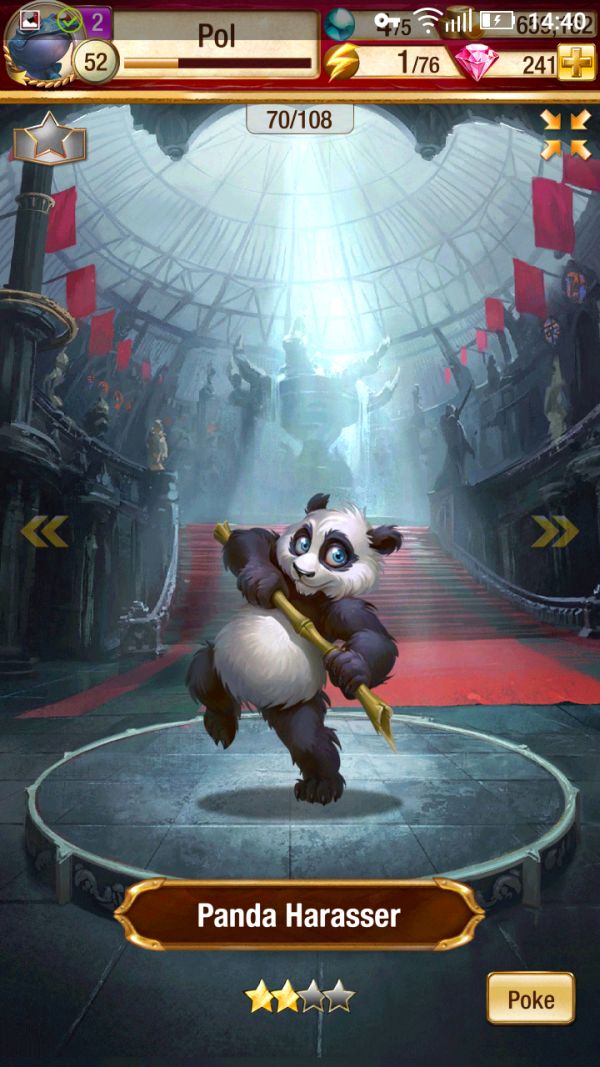 Only Griffin here is not a healer.

That just reminded me, that I don't have Unicorn in my stables. But Witches aplenty..

Yes - I need to for daily rewards.
No - I don't care which place I'm am at. I would skip this feature alone if no daily quest requirement.

Oh, and I picked these creature because they remind me Nature/Forest faction from HoMM games (however Griffin was a Warlock cresture in the beginning) than because their role in CQ.
Last edited by Avonu on May 7 2017, 17:11, edited 1 time in total.
Top

There are three tiers, Gold, Silver and Bronze. With a little sigh I was previously in Bronze tier and was fourth with little effort, now I don't care - there's so much people and the difference is about few prestige points. On entry level around 2000 prestige points there is oscillating more than hundred of people.

Pol wrote:I see, I think that we coul find many creatures from previous M&M games. Not all. I didn't notice elves (obviously not dark), zealots, crusaders (albeit there are Justicars), medusas..

I fought Medusa in Player Dungeon few times, so they are in game. She use bow like in HoMM3. There also are Gorgons, Minotaurs and Manticores in game. So far I didn't see Thunderbird and maybe Calvary (however, there is very familiar looking Valkyrie).
As for Elves/Druids:

Hmm, I just met "Malovelent Tiamat" which looks like better Hydra. But no Medusa whatsoever.

As for ladies, she probably is a druid but somehow I think she could be an elf too. Well, I didn't meet her yet, so I really don't know. 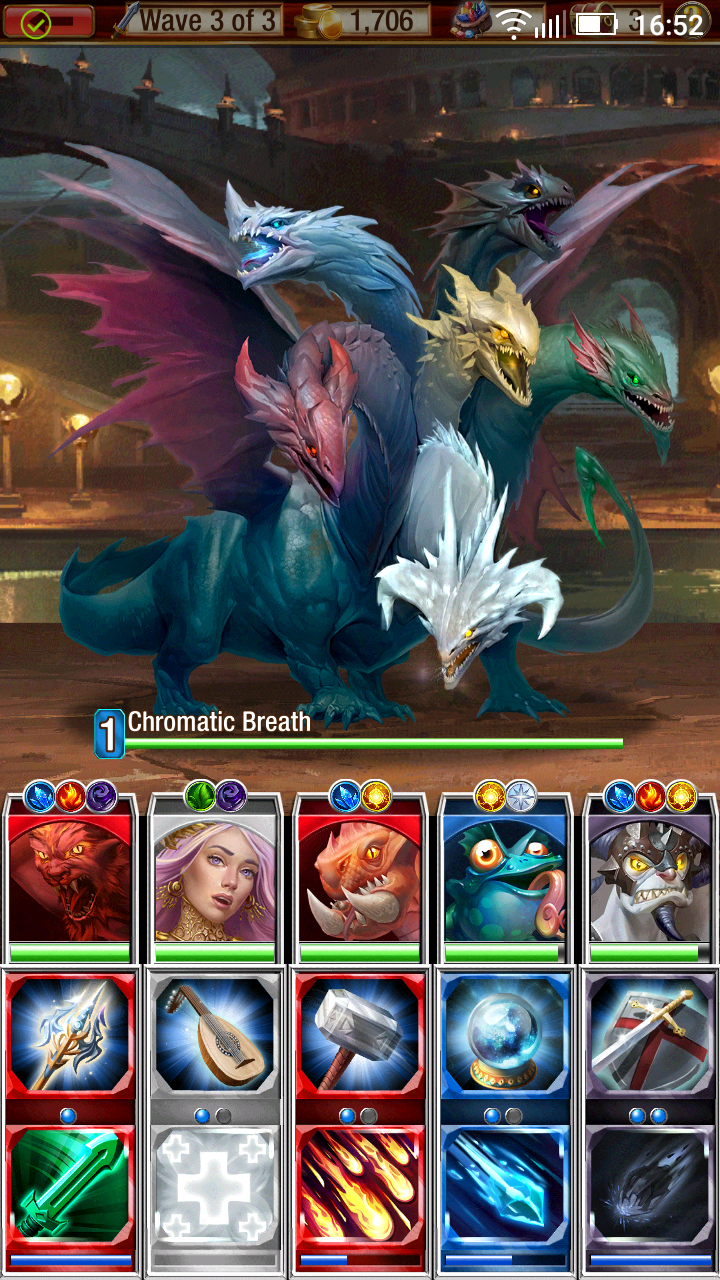 This is Tiamatu, much better than Hydra. Because basic Hydra lack imagination, would even say that is shoddy. 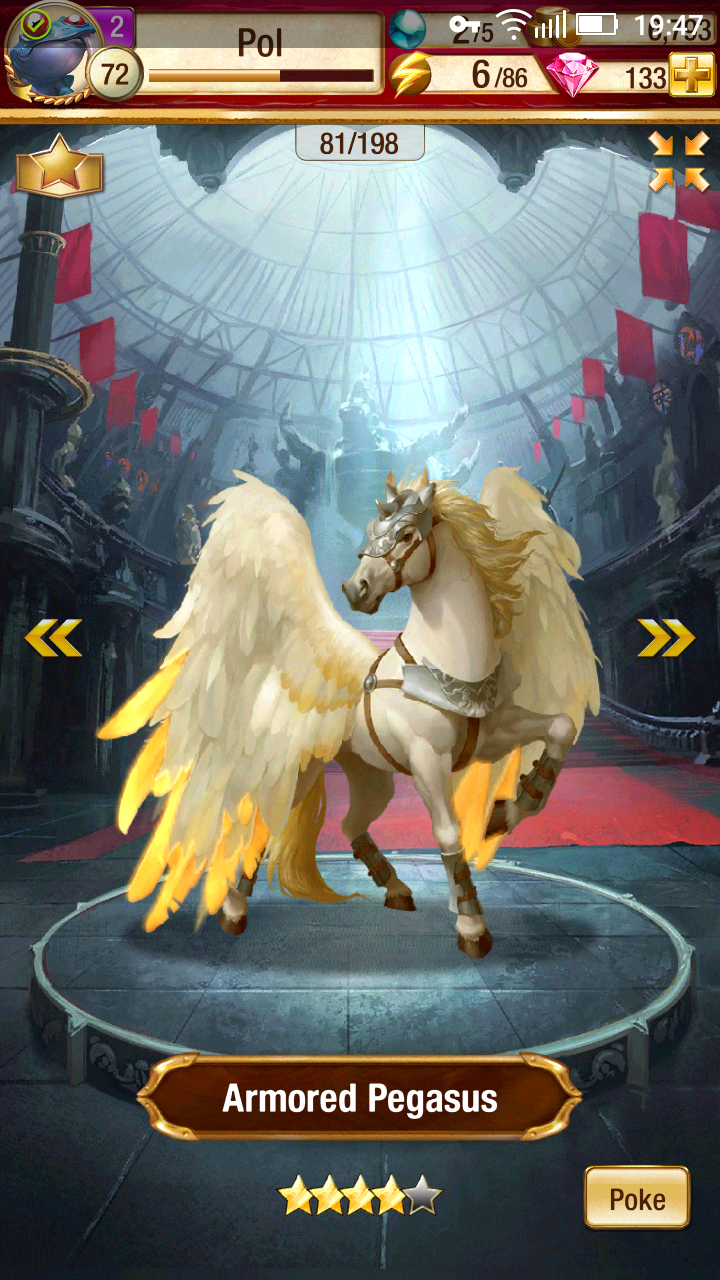 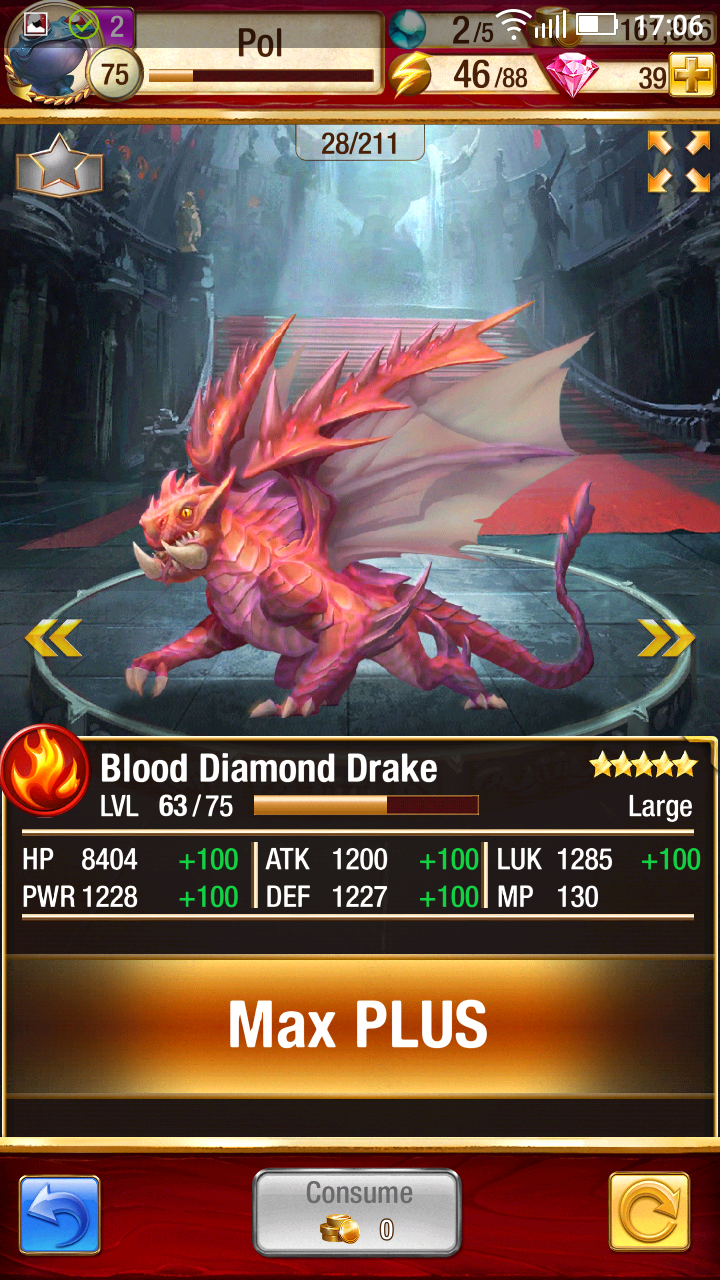 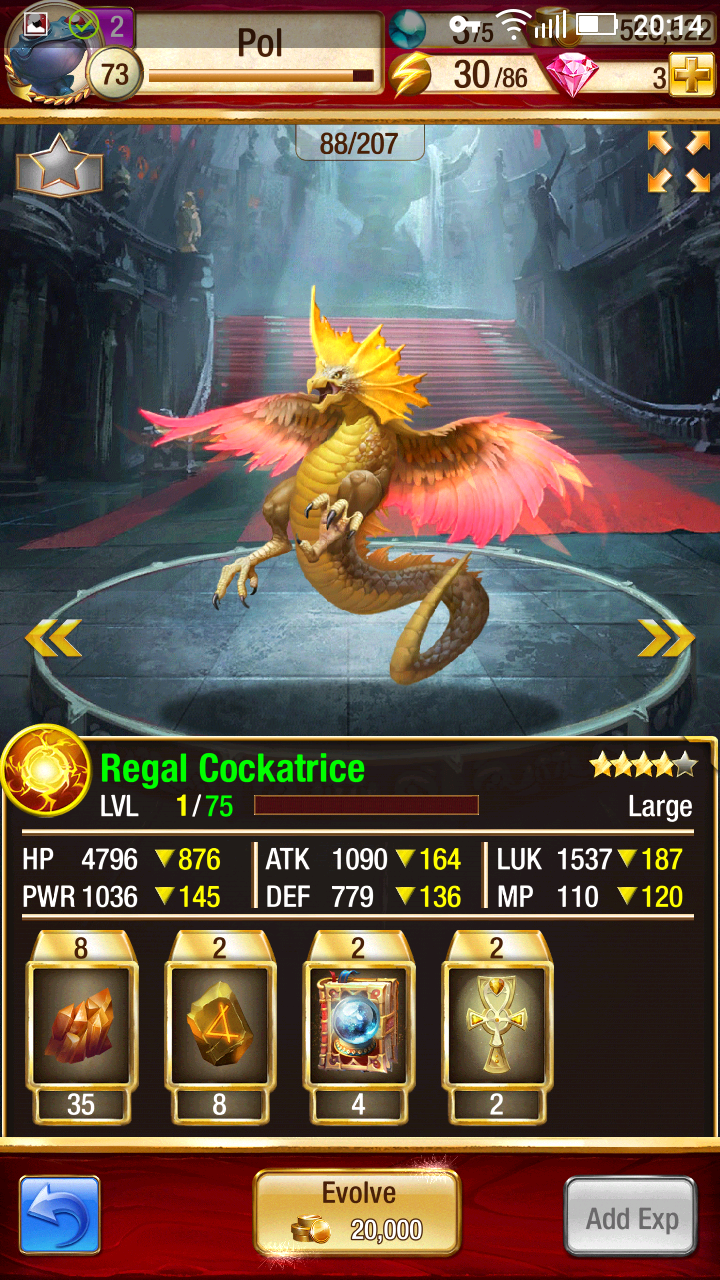 This is the evolution screen, where your see stats for existing creature and with that pic and name of evolution upgrade.

So far, I have no creature fully awakened, especially with Dragons it will be really run on long distance. Leprechanus and Cats are aplenty, so upgrading them is ongoing.

With these screens you reminded me that game was promoted like that this is where RPG and Strategy meet. But both statements would need some backing. RPG part is weaker, because once you play the scenario you just need to re-play it again, almost eternally for resources hunting, gradually on higher difficulty.

Even if creatures positions and army can usually appears in more regions, it's not a new experience.

Strategy, well, dungeons would need to be a bit rethought. In a moment when I'm on ride I can level about 1000 prestige points, as I have them stacked in "mails" but when I leave, or even better meanwhile, when they are riding my dungeon I can easily lost more than what I had got. Not only because of players with better units combinations, but mostly because of visits from players which are at least about 20 levels higher than me.
"We made it!"
The Archives | Collection of H3&WoG files | Older albeit still useful | CH Downloads
PC Specs: A10-7850K, FM2A88X+K, 16GB-1600, SSD-MLC-G3, 1TB-HDD-G3, MAYA44, SP10 500W Be Quiet
Top

For me, I lost all interest when I saw the creatures are just static images. Sorry, but in 2017, even IOS games know more than that graphically. If I wanted to play a glorified card game, I have Magic the Gathering... Not to mention the graphics look like something from those dime'a dozen Korean MMORPGs, all the over-detailing and vivid colors...
Why can't we have a proper turn based Heroes/King's Bounty like game? I'd be happy even if Capybara games made something akin to Clash of Heroes on their own. I could play that game for hours on end...
Last edited by BB Shockwave on May 8 2017, 23:13, edited 1 time in total.
Top

If you want something more than just static images, you always can try Ubisoft's Elemental Guardians. It's same mechanism but with "better" graphics

(names are guessing, not from game itself).
Personally I prefer static images over that.
Top

@BB Shockwave
I'm pretty afraid that you won't be happy in any case. Simply new Heroes or Might&Magic for iOS/Android don't exist.

Graphic is perfect for mobile game, with so high attention to details and effects that many other games should envy. But it's "static", yes, the unit can only change it's size and have applied continuous effects. When it goes to attack it enlarge for a moment. In this case I'm happy that it's so simple, have no doubt, that if they would be fully animated I would need to get new phone. And like with H7, that's not gonna to happen.
Last edited by Pol on May 10 2017, 17:55, edited 2 times in total.
"We made it!"
The Archives | Collection of H3&WoG files | Older albeit still useful | CH Downloads
PC Specs: A10-7850K, FM2A88X+K, 16GB-1600, SSD-MLC-G3, 1TB-HDD-G3, MAYA44, SP10 500W Be Quiet
Top Another pack of boss creatures (from left to right): This is great collection of creatures! At his moment you must be "Honourable Dungeon Sweeper"

With no doubt Abomination is inspired by DOOM. Sure that there are more units with heavy inspiration, I especially like the Owl and Pegasus.

Yet I still didn't encoutered Medusa but seen her in CQ news..

So far, I still have just one Legendary so I'm probably not much feared myself. Though I have other creatures aplenty. I'm especially fond of my dragon.

Pol wrote:This is great collection of creatures! At his moment you must be "Honourable Dungeon Sweeper"

I just trying to pick up fights with creatures, I don't screenshoted yet.

You can use "Dungeon Preview" option (or something like that) to see your opponent creatures in his Dunegeon defense.

Pol wrote:how can water creatures fight on parched soil is beyond me.

To be honest it's not so a big problem with all these Undead, Dragons and live trees roaming around. Better to have some unique creature than cut them off because of "logic".

And another pack of bosses: As for Ifrit, the end is Ifrit >> Ifrit Ravager >> Ifrit Pyrelord - that's probably the last one.

Pol wrote:What for unit is the third one in your army?

That should be Firebat - look at my previous posts. IIRC it dropped from Valentine Event.